Decentralization of the Internet of Things: Monthly Discussion Written by Patrick on January 3, 2019 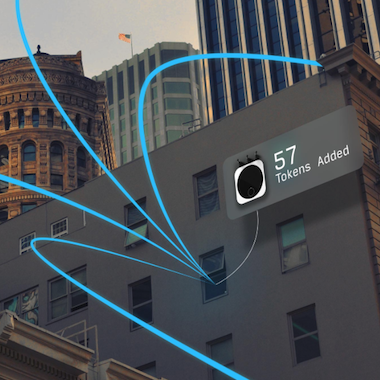 Decentralization of the Internet of Things

The topic of decentralization has started to pop up in tech circles increasingly over the last year.  Before we get into what decentralization is and how it relates to the Internet of Things, let’s just look at some evidence behind this emerging tech trend:

Mozilla and the National Science Foundation ran the, “Wireless Innovation for a Networked Society (WINS) Challenge” in 2017 which offered over $2 million in prizes to various decentralization innovations.

Looking at Google Trends we see that that across North America, interest in decentralization picked up last year in mid-2018 as compared to previous years.  Of course it is important to note that Google Trends does not measure intent but rather just general interest by way of search volume 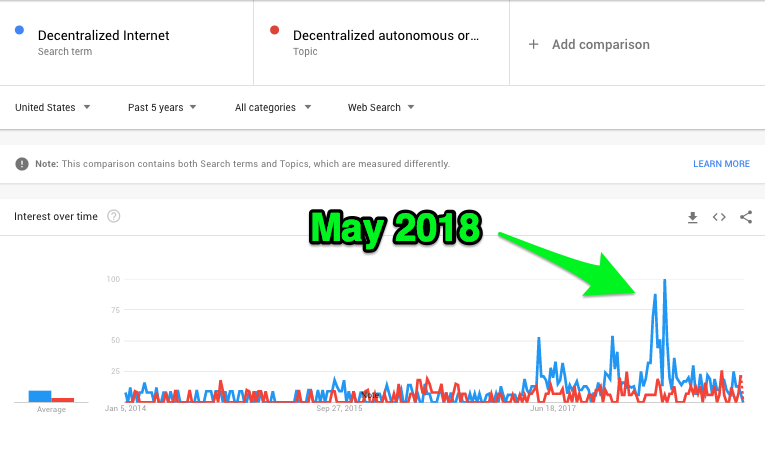 Admittedly, much of this interest may have been tied to blockchain.  But notably, the interest in decentralization seems to have lagged interest in blockchain by about 6 months, which was presumably largely tied to the flood of interest in Bitcoin as prices surged in December 2017 and subsequently collapsed.

Also quite notably, interest in decentralization itself is, “decentralized,” – with large geographic metro regions around the country other than Silicon Valley taking a greater degree of interest than the center of much of tech research & development financing itself – the Bay Area being the typical technological risk pool nexus.

The show Silicon Valley, a standard comedic gem exemplifying the startup and tech world, (spoiler alert) featured decentralization as its main plot device for the fifth season.  The fictional company from the show, PiedPiper even has a website featuring a hilarious description of what decentralization is:

What was built to be the ultimate platform for the free sharing of knowledge has turned into a money-hungry monster feasting on our privacy and freedom.

But fear not, for Pied Piper has the answer! And it’s simple:

The show makes a good point – decentralization, like many concepts in tech, are often marketed in overly verbose, confusing ways.

OK, So What Does This Mean?

What does this data tell us?  Of course one could draw a continuing linear or exponential graph in one’s mind moving into the future showing interest in decentralized internet constantly expanding on into the future, but that line may not be strictly predictive of what will actually happen.  Rather, this article is meant to be presented as simply an, “interesting marker,” to show what might be an interesting area to explore or read about.

Getting to the point about how to better understand how the decentralized internet may be better described and understood, one very interesting article on the topic came out last year from tech.co by Adam Rowe.  As the article states:

The internet is not 100 percent legally and physically “centralized,” since no single corporation owns the entire internet. But relatively few large, physical servers (associated or operated by relatively few large corporations) are responsible for hosting essential elements of what we consider the internet. These web hosting and cloud computing servers are responsible for keeping our email, social media, and webpages available to all — and that means that the companies that own those servers have an outsized impact on how the internet runs.

Our centralized system leaves our internet — and by extension, our jobs and relationships — open to a few major vulnerabilities that will likely only get worse in the near future. After all, in 1995, less than one percent of the world’s population was online and today, the Pew Research Center has found, 73 percent of people are online daily.

This article is a recommended read – in which he goes in depth about several problems and use cases associated with centralization.  In short, summarizing from that article, decentralization is essentially a way of  primarily geared toward the following perceived problems:

Another problem left unstated within this article, perhaps because it was purely technically focused rather than application-focused was put forward by researchers at Minnesota-based Optum last year, as stated in this article from CNBC.  The problem boils down to this:

As stated within the article:

For insurers and the doctors they contract with, finding a better way to keep provider lists up to date, could make a big difference when it comes to administrative costs.  “From the perspective of the provider organizations … (they) can work with up to dozens of insurance plans, and each of the plans are individually requesting or verifying the provider information,” said Mike Jacobs, senior distinguished engineer with UnitedHealth Group’s Optum division.  The administrative costs of updating and tracking down that information are estimated to be more than $2 billion dollars a year for the health-care industry. Yet, in 2016 federal health officials found that nearly half of provider listings for Medicare Advantage plans were inaccurate, with incorrect provider addresses and phone numbers.  “That’s such a large issue that it’s really affecting access to care for many patients,” Jacobs said.

Towards a Better Understanding & Relation to Internet of Things

Beyond these problems mentioned, our aim at IoT Fuse in January 2018 is to explore decentralization by bringing together a number of speakers and interested parties at our monthly event to discuss the topic on an interpersonal and community-based discussion level.  We have found that beyond reading articles online, often a great way to accelerate one’s learning is to actually meet and talk with the experts and people who are excited about a particular topic.

One of the speakers we have lined up for January is Dal Gemmel, who is the Head of Product for an interesting blockchain-decentralization company called Helium.  An interesting white paper was written by Helium a few years ago describing the system, which can be found here.

In short, Helium is a decentralized wireless network designed for individual smarthome providers to be able to provide networks to their communities.  Helium was founded in 2013 and has raised equity funding from prominent venture capital firms including Khosla Ventures.

You can join the IoT Fuse team as well as Dal and other interesting speakers and other decentralization enthusiasts in attendance for free by signing up here or finding us on our Meetup group.  Looking forward to seeing you there.